i saw a post on facebook this morning from a professing christian with one of those mega-rockband-wanna-be churches, only they rock for god not man (yeah, right...like they don't play for man).  anyway, it was basically a plea for people to come to their church, because, surprise of all surprises, it's not like all those other judgmental churches they think everyone grew up in.  Basically it said, come to our church and have fun, wear any clothes you want, and we will accept you no matter what.  we have a cool band, so you can hear some head-bangin loud-as-hell music first thing sunday morning.  (HOW is that peaceful???)  only our music has words about god, even though you can't hear the lyrics because we shout and scream so loud (we have to keep up with those heavy metal sinners, you know, so we can keep drawing people in here).  we even dress cool and talk cool.  cool any way you look at it.  come on to our church and you can be cool too.  Cool with Jesus.

ok i got off the point.  my point is that they think people don't come to their churches because they've been judged harshly in their childhood churches and now reject everything god.  for me, i never went to church growing up and if i feel as if i'm being judged, i'll just leave that place and go somewhere else.  i'm just me and don't want to follow someone else's idea of who they think i should be.  i like to be free.  can't be caged.

truth is, i just plain don't like most christian churches, and believe me, I've been to almost every christian denomination I could find: Assemblies of God, Hand-Clapping Presbyterian, Non-Hand-Clapping Presbyterian, Catholic (Regular and Roman), non-denominational, Baptist (all flavors), Mennonite (which is not Protestant, but Anabaptist, like the Amish), Charity (also Anabaptist, but a little looser), Full Gospel, Pentecostal (a few different levels of those), Cool Rock and Roll Churches, Cowboy Churches (ok, I didn't go to the cowboy church, but I SAW it!  It takes place in a big barn), and too many more to name.

it's either boring as hell, or, if i go to a cool church, i have a migraine for two days (they just haven't figured out how to work those amps right and the sound is always fuzzy, static-y and just loud, loud, loud noise).  and, it's the same, same, same message over and over and over and over.  most mainstream christian churches never really have a new message or anything new to offer -- they just constantly repackage for a new feel or a new look.  same message, new package.  nothing new under the sun, just some cool new clothes and some rockstar wanna-be's.  give me steven tyler or robert plant over them any day -- they're much more inspiring.  i might even get up early on sunday then.

Disclaimer: I don't mean any disrespect for those that enjoy these churches, i just don't prefer them.  But if that's your thing, then that's great.  Different folks, different strokes.  :)
Posted by jimi at 6:12 AM 5 comments:


We had always been more conservative than most, and so would occasionally throw out the TV for a needed respite.  Then we usually would get another one after a few months.  But this time we won't get cable.  Just the "safe" channels.  Maybe we'll just use the monitor for good "Christian" videos or DVDs.

Even though we lived a seemingly healthy, wholesome life already -- homeschooling, spending lots of quality time with each child, teaching them spiritually...I still had that low, underlying fear vibrating so softly underneath.

I had become scared and fearful.  My not-very-old Christianity told me to fear.   The Bible says to fear God.  I also had fear of what the future held for our children.  Fear of not being able to overcome the evils of the world.  Fear I would ruin our children.  Fear that Satan would worm his way into our lives so subtly that we wouldn't even notice, like C. S. Lewis described in The Screwtape Letters.

While homeschooling the children, we had started using a Mennonite curriculum.  I felt such a peace when reading aloud the little storybooks.  So pure and wholesome:

Our family's all outside tonight:
Big brother mows the yard,
My sister's weeding flower beds,
And Mother plants Swiss chard.

Molly was six years old. Her little brother Timothy had just turned three.
They lived with their father and mother in a little house in the country.
One day Mother was very sick. She was so sick that she had to stay in bed,
so Grandma came to spend the day while Father was at work.
Molly wanted to help Mother too but she did not know what to do.
"Dear God," she prayed, "please show me how I can help Mother."


Whenever I ordered some schoolbooks, I'd also order a few extras for me, some booklets and pamphlets, being the voracious reader I am. The Mennonite stance on competitiveness was exactly how I'd always felt.  We had never felt quite comfortable with our children being in those fighting sports, where the goal is always to beat somebody -- to always try and be better than another.


We were finding so many areas that we agreed upon. And the little storybooks were so peaceful.  I wondered if there were people who actually lived these principles, who lived this wholesome, simple life. 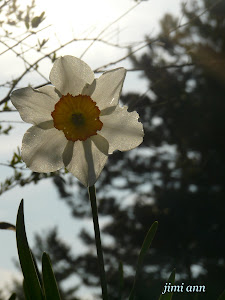 Newborns are in the dawn of their lives. Toddlers and young children are in their morning. Teenagers and young adults are experiencing late morning, and it's high noon for those in their 20's and 30's -- what some call "the prime of life." I'm in the afternoon season of my life and still being awakened -- now more than ever. The purpose of this blog is to inspire and be inspired -- to grow in Spirit. And to have a safe place to write.

The quote at the top of page is by Wayne Dyer.

jimi
I'm a 51 year old mother and teacher to 4, and wife of 20+ years to Drew. I enjoy writing, photography, fine art, French and Mid-eastern cuisines, bird-watching, meditative walks in nature, yoga, studying nutrition, and Vivaldi. I've had an interesting spiritual journey and lived as a Mennonite for several years and have had a crush on Steven Tyler since about 1976.